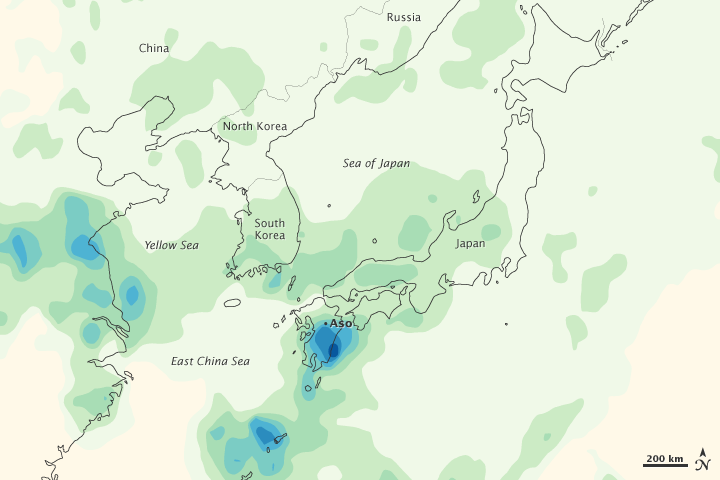 In early July, torrential rainfall caused floods on Japan’s island of Kyushu. News reports described rainfall totals in some areas as unprecedented, with as much as 20 inches (500 millimeters) falling on the town of Aso. Flood waters submerged fields and swept away cars, and mudslides destroyed homes.

This color-coded image shows rainfall totals from July 6 to 12, 2012. The heaviest rainfall—more than 300 millimeters or over 12 inches—appears in dark blue. The lightest rainfall—less than 50 millimeters or 2 inches—appears in light green. Trace amounts of rain appear in yellow. A pocket of intense rain appears immediately south of the town of Aso on the island of Kyushu, with the heaviest rain occurring along the coast.

On July 13, 2012, MSNBC reported that the death toll had climbed to 19 as rescuers continued looking for people missing amid the rain. Meanwhile, The Japan Times reported that around 33,000 residents were under evacuation orders.