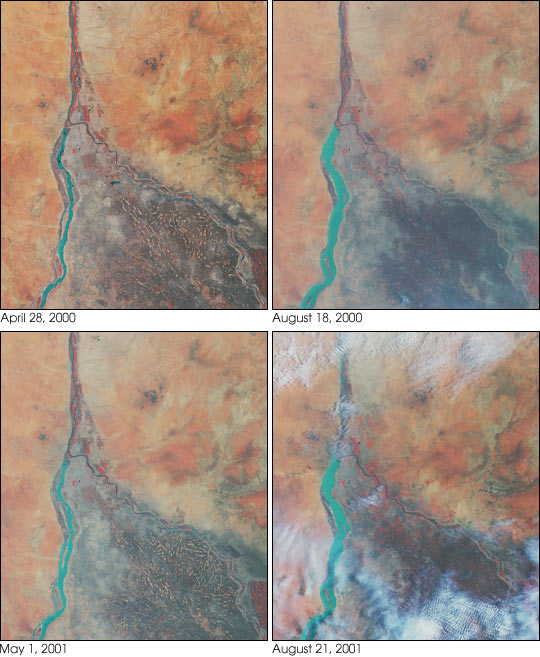 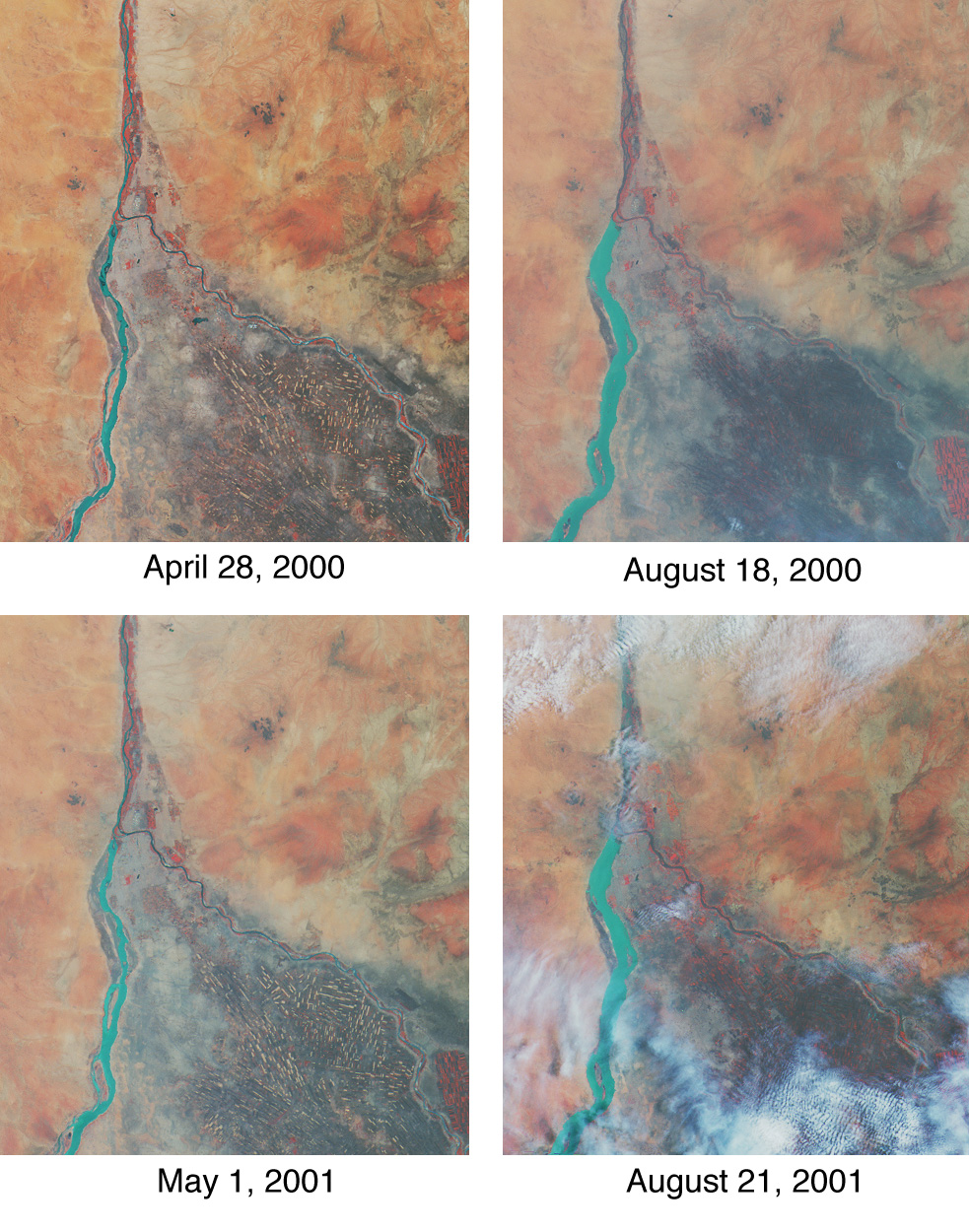 Throughout history, the rising and falling waters of the mighty Nile River have directly impacted the lives of the people who live along its banks. These images of the area around Sudan’s capital city of Khartoum capture the river’s dynamic nature. Acquired by the Multi-angle Imaging SpectroRadiometer’s nadir (vertical-viewing) camera, they display the extent of the Nile waters before and after the onset of the rainy seasons of 2000 (top pair) and 2001 (bottom pair). The images are displayed in “false color”, using the camera’s near-infrared, green, and blue bands. With this particular spectral combination, water appears in shades of blue and turquoise, and highly vegetated areas show up as bright red.

Originating in Uganda and Ethiopia, respectively, the waters of the White Nile (western branch) and Blue Nile (eastern branch) converge at Khartoum (about half-way between image center and the left-hand side), and continue to flow northward as the Great Nile. Although the most obvious feature in these images is the increased width of the White Nile between spring and summer, careful inspection shows that the Great Nile is at its widest in August 2001 (note in particular the area between the clouds near the top of this panel). Heavy rains in the Blue Nile catchment area of the Ethiopian highlands led to a rapid overflow of the river’s floodwaters into the main stream of the Great Nile, leading to extensive flooding, the worst effects of which occurred north of Khartoum. According to the Food and Agriculture Organization of the United Nations, tens of thousands of people have fled their homes, and the number of people in need of urgent food assistance in Sudan, estimated at three million earlier in the year, was likely to increase with the onset of these floods.

South of the confluence of the White Nile and the Blue Nile, the area of a cross-hatched appearance is the irrigated plain of El Gezira. The Gezira irrigation scheme uses water from the Makwar Dam (now called the Sennar Dam), located across the Blue Nile south of Khartoum. Among the main agricultural products of this region are cotton, millet, peanuts and fodder crops.

Overall prospects for Sudan’s 2001 grain crop were already poor prior to the flooding due to a late start of the rainy season in parts of the country. Following two consecutive years of serious drought, precipitation arrived too late to save the grain harvest that normally begins in late August. Lower harvests for the past two years coupled with depletion of stocks have led to a rise in cereal prices, reducing access to food for the Sudan’s poorer citizens, already suffering from the effects of Africa’s longest running civil war.

Each of these images represents an area of about 130 kilometers x 150 kilometers.