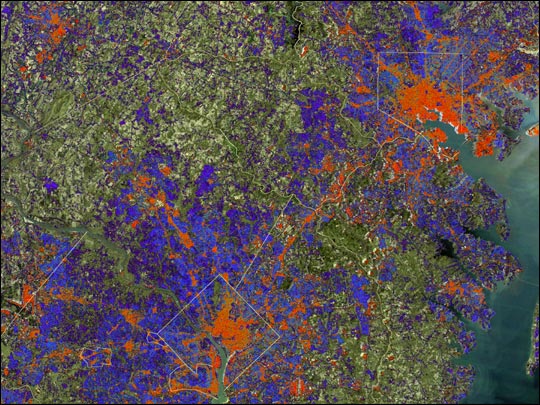 Scientists are using a major advance in satellite-based land surface mapping to create more accurate and detailed maps of our cities. These maps provide urban planners with a better understanding of city growth and how rainfall runoff over paved surfaces impact regional water quality.

These space-based maps of buildings and paved surfaces, such as roads and parking lots, which are impervious to water, can indicate where large amounts of storm water runs off. Concentrated runoff leads to erosion and elevated discharge of soil and chemicals into rivers, streams, and ground water.

Image courtesy Stu Snodgrass, NASA GSFC Scientific Visualization Studio, based on data from Landsat 7 and IKONOS.
© All Rights Reserved: Use of IKONOS, GeoEye, QuickBird and WorldView imagery must be coordinated with Maxar.