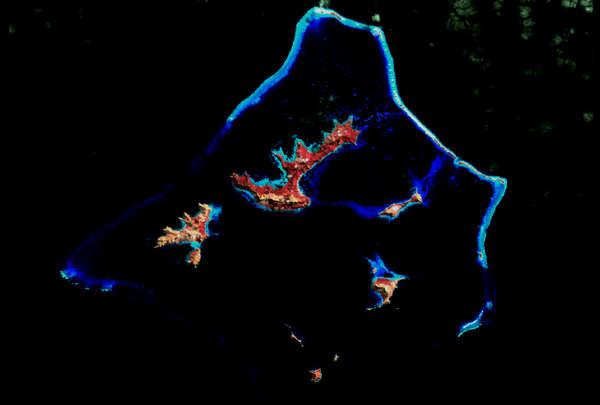 Coral is the ocean's architectural memorial to the lives of deceased coelenterates. The word "coelenterate" refers to the central body cavity found in the creatures. Located in tropical latitudes, the hard structures we know as coral are really the incremental build-ups of calcium carbonate deposited from the skeletal remains of these tiny colonial animals.

In many parts of the world coral is threatened from a variety of causes, some natural, some caused by people. By developing a global, searchable database of coral reefs based on state-of-the-art satellite data, researchers could have a powerful new tool for studying this vital and elegant part of the Earth's biosphere. This will help them not only develop better strategies for conservation, but help them refine methods for understanding what processes drive change in the world's oceans.

One year, 900 locations, thousands of coral reefs. That's the tally of NASA's Landsat 7 satellite as it continues to deliver cutting edge images and information about the Earth. Data being presented this week at an international conference in Indonesia is the first assessment of the physical condition of major reefs from the the new Landsat 7 collection of images. More than 5000 coral reef scenes have been amassed in the first year of Landsat 7's operation. In that collection, many reefs have been seen more than once, offering scientists an opportunity to study seasonal variations as well as other changes in the reefs caused by hurricanes and climate change.