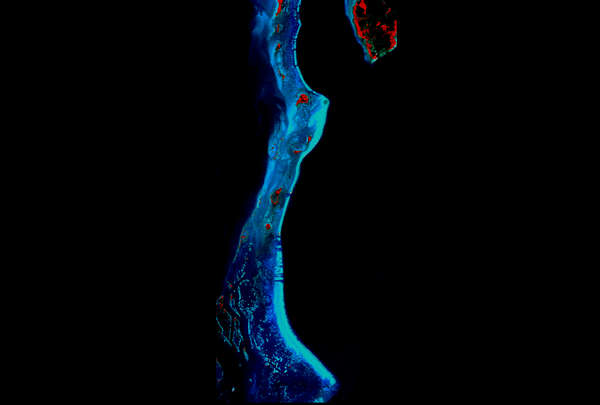 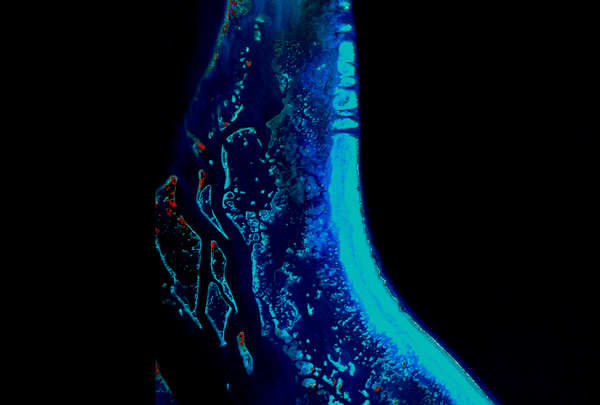 These images from the Landsat 7 satellite depict a number of coral reefs like delicate brush strokes of color against an indigo canvas. Landsat 7 "sees" the Earth differently than a camera. By detecting light in discretely separate ranges of color or more accurately, electromagnetic bands the instrument can tailor images to highlight particular features being studied by experts. The different shades in these images highlight various features specific to each coral colony. Patches of bright red show places where coral reefs are actively populated with living organisms.

The bands of color in the first image show "natural color", essentially the colors we would see if we could look down from Landsat 7 ourselves. But in this image, an exchange of the visible light red band for one that sees near infrared data instead makes some areas on the reef jump out in bright red relief. The near infrared band best gathers the electromagnetic signature of a thriving ecosystem. In these images where there is not a red signal, the coral is not actively growing.

It's important to remember that much like the bark of a tree is primarily the only actively growing part of the organism, not all of the area of a coral reef needs to be growing to indicate health. Living coral makes its home on the ancient beds of ancestors, which essentially provide a foundation for newer generations to anchor themselves.

One year, 900 locations, thousands of coral reefs. That's the tally of NASA's Landsat 7 satellite as it continues to deliver cutting edge images and information about the Earth. Data being presented this week at an international conference in Indonesia is the first assessment of the physical condition of major reefs from the the new Landsat 7 collection of images. More than 5000 coral reef scenes have been amassed in the first year of Landsat 7's operation. In that collection, many reefs have been seen more than once, offering scientists an opportunity to study seasonal variations as well as other changes in the reefs caused by hurricanes and climate change.