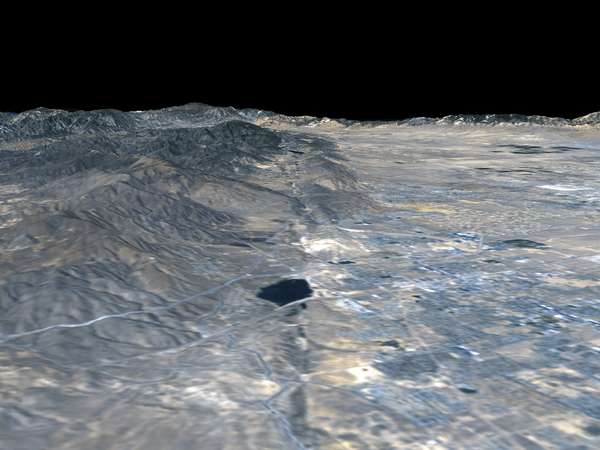 The prominent linear feature straight down the center of this perspective view is the San Andreas Fault. This segment of the fault lies near the city of Palmdale, California (the flat area in the right half of the image) about 60 kilometers (37 miles) north of Los Angeles. The fault is the active tectonic boundary between the North American plate on the right, and the Pacific plate on the left. Relative to each other, the Pacific plate is moving away from the viewer and the North American plate is moving toward the viewer along what geologists call a right lateral strike-slip fault. Two large mountain ranges are visible, the San Gabriel Mountains on the left and the Tehachapi Mountains in the upper right. The Lake Palmdale Reservoir, approximately 1.5 kilometers (0.9 miles) across, sits in the topographic depression created by past movement along the fault. Highway 14 is the prominent linear feature starting at the lower left edge of the image and continuing along the far side of the reservoir. The patterns of residential and agricultural development around Palmdale are seen in the Landsat imagery in the right half of the image. SRTM topographic data will be used by geologists studying fault dynamics and landforms resulting from active tectonics.