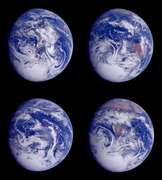 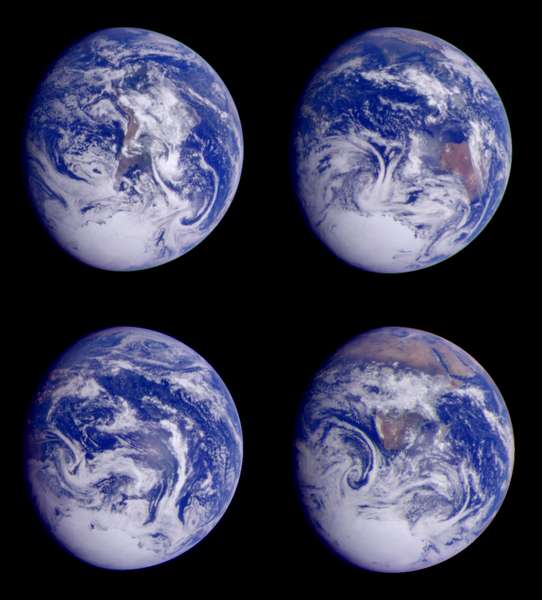 Global images of Earth from Galileo. In each frame, the continent of Antarctica is visible at the bottom of the globe. South America may be seen in the first frame (top left), the great Pacific Ocean in the second (bottom left), India at the top and Australia to the right in the third (top right), and Africa in the fourth (bottom right). Taken at six-hour intervals on December 11, 1990, at a range of between 2 and 2.7 million kilometers (1.2 to 1.7 million miles). P-37630 < P>These images were taken during Galileo's first Earth flyby. This gravity assist increased Galileo's speed around the Sun by about 5.2 kilometers per second (or 11,600 miles per hour) and substantially redirected Galileo as required for its flybys of the asteroid Gaspra in October 1991 and Earth in 1992. Galileo's closest approach (960 kilometers, or 597 miles, above the Earth's surface) to the Earth was on December 8, 1990, 3 days before these pictures were taken.

Each of these images is a color composite, made up using images taken through red, green, and violet filters. The four images are part of the Galileo Earth spin movie, a 256-frame time-lapse motion picture that shows a 25-hour period of Earth's rotation and atmospheric dynamics. The movie gives scientists a unique overall view of global weather patterns, as opposed to the limited view of weather satellite images.

This image and other images and data received from Galileo are posted on the World Wide Web, on the Galileo mission home page at URL http://galileo.jpl.nasa.gov.