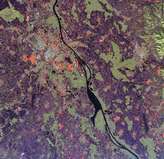 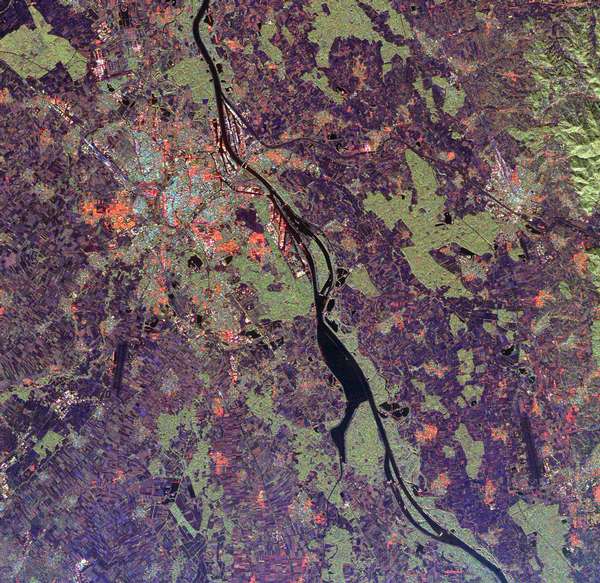 This spaceborne radar image shows a segment of the Rhine River where it forms the border between the Alsace region of northeastern France on the left and the Black Forest region of Germany on the right. The Rhine, one of the largest and most used waterways in central Europe, winds its way through five countries from the Swiss-Austrian Alps to the North Sea coast of the Netherlands. The river valley is densely populated, as seen in this image, which shows the French city of Strasbourg, the light blue and orange area in the upper left center; and the German cities of Kehl, across the river from Strasbourg and Offenburg, the bright area in right center. The fertile valley is famous for its wine production and most of the agricultural areas in the image, shown in purple patches, are vineyards. The light green areas are forest. Scientists can use radar images like this one to monitor the effects of urban and agricultural development on sensitive ecosystems such as the Rhine River valley.

This image was acquired by the Spaceborne Imaging Radar-C/X-Band Synthetic Aperture Radar (SIR-C/X-SAR) onboard the space shuttle Endeavour on October 2, 1994. The image is 34.2 kilometers by 33.2 kilometers (21.2 miles by 20.6 miles) and is centered at 48.5 degrees north latitude, 7.7 degrees east longitude. North is toward the upper left. The colors are assigned to different radar frequencies and polarizations of the radar as follows: red is L-band, horizontally transmitted and received; green is L-band, horizontally transmitted, vertically received; and blue is C-band, horizontally transmitted, vertically received. SIR-C/X-SAR, a joint mission of the German, Italian and United States space agencies, is part of NASA's Mission to Planet Earth program.