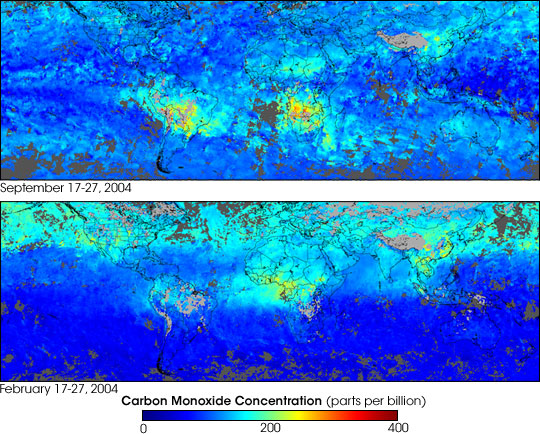 Carbon Monoxide in the Southern Hemisphere

Vegetation burning in the Southern Hemisphere peaks during the dry season months between July and September. Burning of vegetation biomass releases various particles and trace gases into the atmosphere, including carbon monoxide (CO). The emissions from fires in South America and South Equatorial Africa significantly contribute to the global CO burden during this season, as is evident in the false-color images above. The pair of images compares the CO concentrations measured in the lower troposphere for February (bottom) and September (top) 2004.

The data have been taken with the Measurements of Pollution in the Troposphere (MOPITT) instrument launched onboard NASA’s Terra satellite in December 1999. The images show the averaged CO concentrations in parts per billion (ppb) at 700 mbar (~3 km altitude)for February 17-27, 2004, and September 17-27, 2004, respectively. High CO levels are indicated in red, while blue shades represent low CO concentrations. Missing data either due to clouds or due to high surface altitude (e.g. over the Andes or the Himalaya) are colored in gray.

Data courtesy of the NCAR and University of Toronto MOPITT Teams