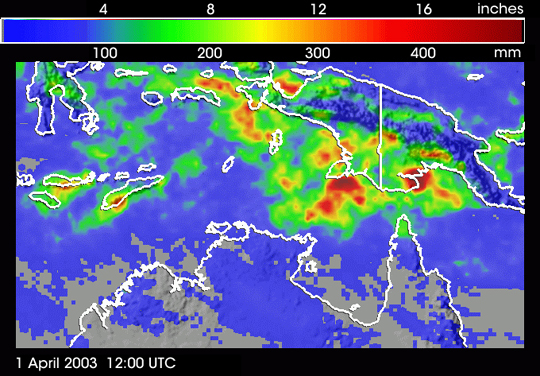 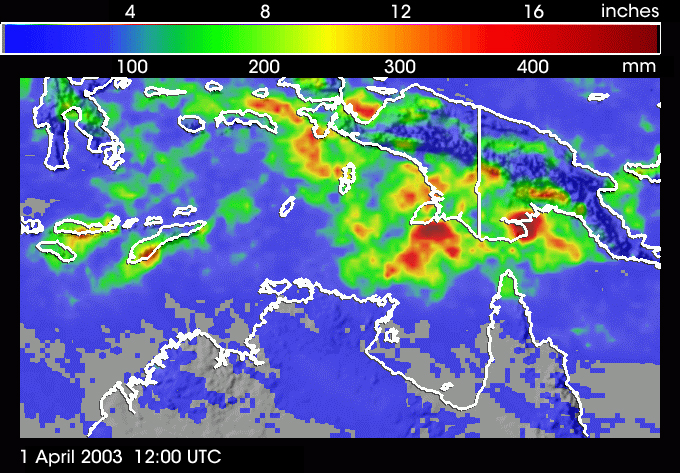 Heavy rains dumped a foot or more of water over several Indonesian island regions during March 29-April 1. The image graphically portrays heavy rain accumulations particularly over and offshore of Papua New Guinea and over the easternmost islands of Flores and Timor in Jakarta. The accumulation map was created using a technique that combines rainfall information from a number of NASA and DoD satellites. NASA's Tropical Rainfall Measurement Mission (TRMM) satellite plays a key role in mapping the rain. The heavy rains occurred sporadically in the form of intense clusters of thunderstorms, embedded within the larger Winter Asian Monsoon circulation, and modulated by the passage of an atmospheric wave called the tropical intraseasonal oscillation. The very localized but extreme rain amounts over the island of Flores resulted in violent landslides that killed 23 people.

This image was created by Hal Pierce of the NASA Goddard Space Flight Center. More information on TRMM can be found at trmm.gsfc.nasa.gov