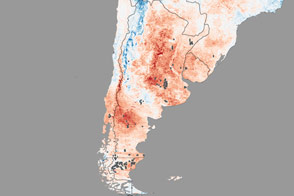 A deadly heatwave left its signature on the land in Argentina. This map shows land surface temperatures between December 19–26, 2013, compared to average temperatures for the same period from 2000–2012. Nearly the entire country was much warmer than normal, with some locations more than 15°Celsius above average.

Argentina was in the midst of an intense two-week heatwave when the data for the map was acquired by the Moderate Resolution Imaging Spectroradiometer (MODIS) on NASA’s Terra satellite. According to news reports, air temperatures reached as high as 45°C (113°F) in central Argentina. High demand for air conditioning led to widespread power outages and water shortages, reported the Buenos Aires Herald.