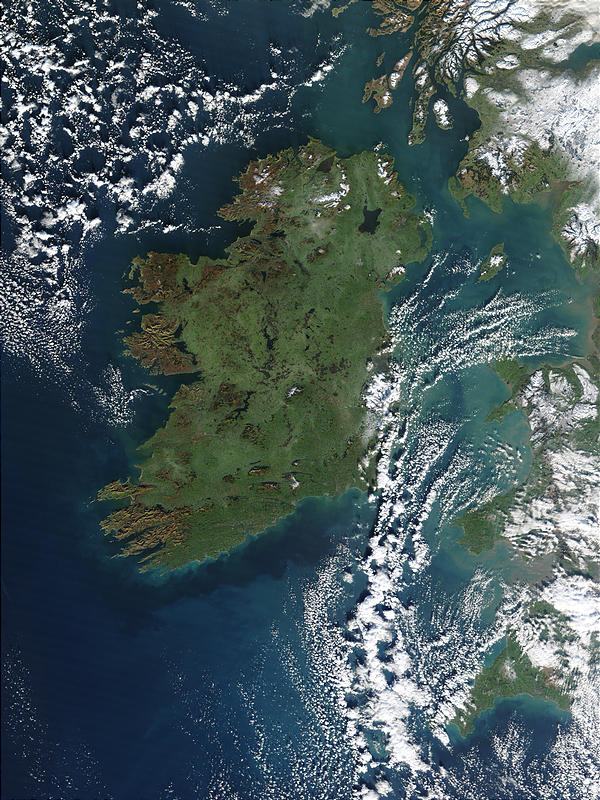 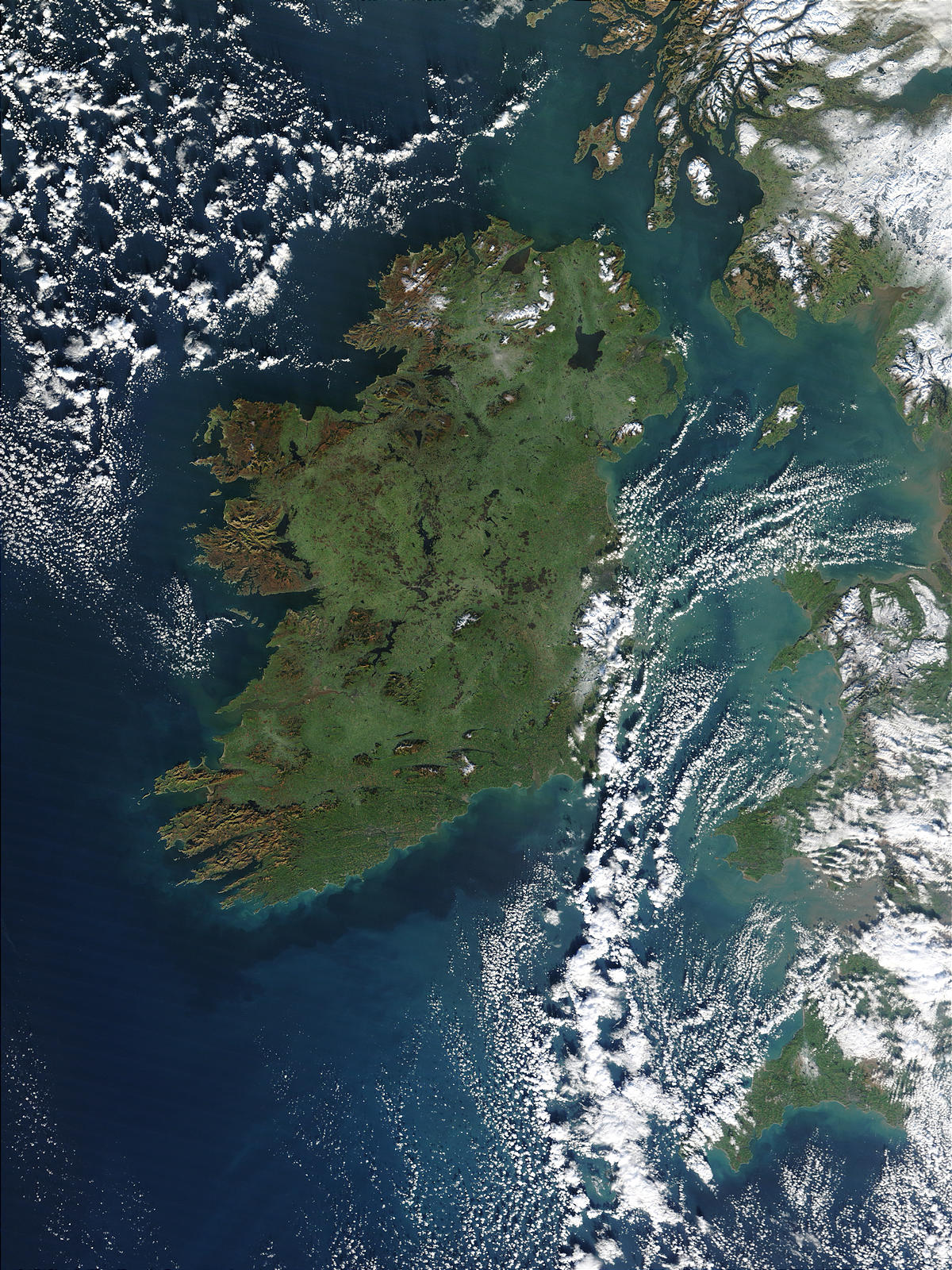 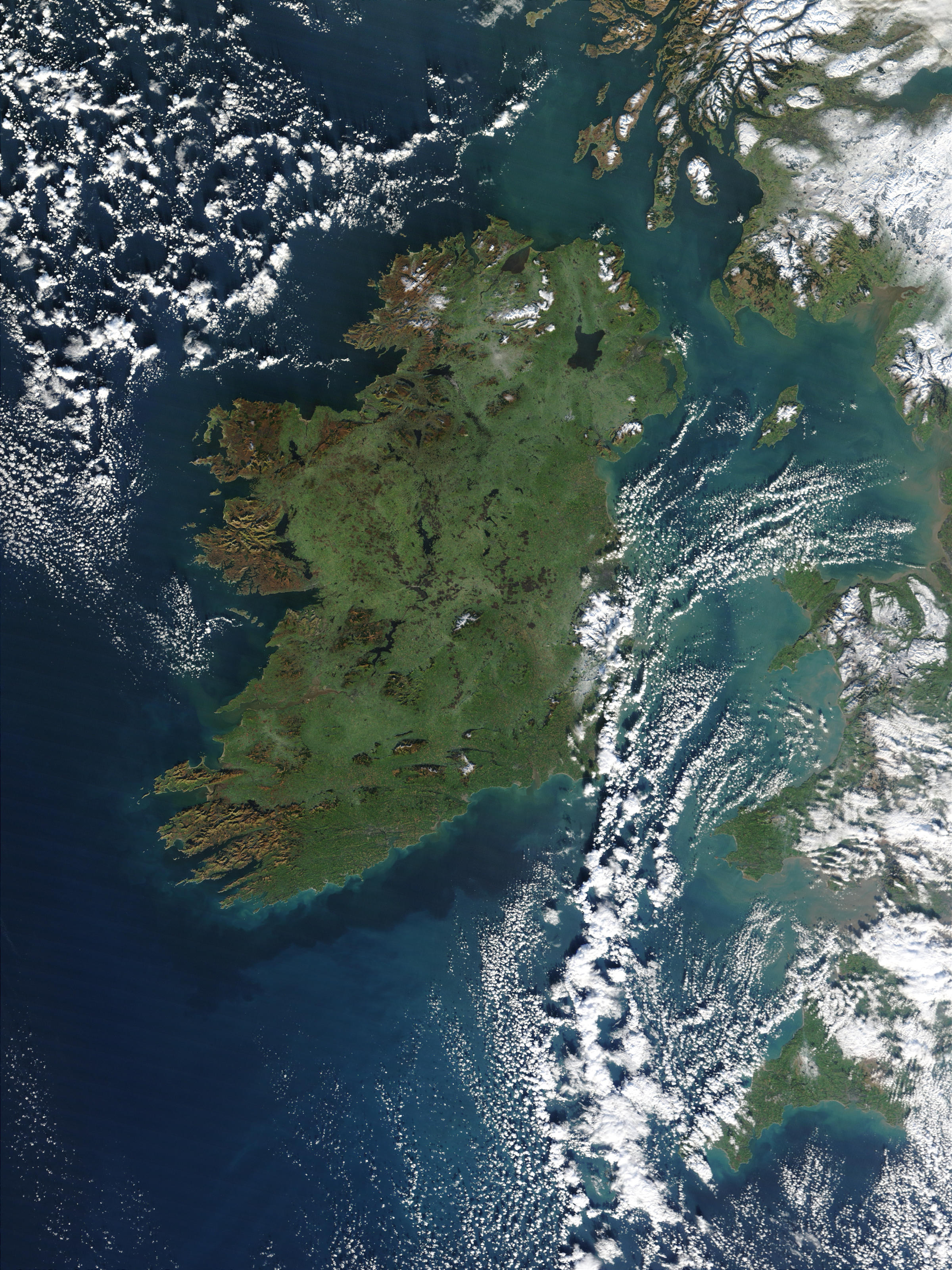 Ireland seems beyond the reach of winter’s icy grip in this true-color Moderate Resolution Imaging Spectroradiometer (MODIS) image from January 4, 2003. The rugged cliffs that mark the island’s west coast are showing their red-brown, rocky surface, but the low-lying interior region is still wearing the island’s signature green.

Ireland is essentially a depression ringed by relatively low mountains. The highest elevation in Ireland is Carrantuohill, located in the rugged terrain of the southwest tip. The bowl-like shape creates the network of lakes scattered across the island, and over time has produced peat bogs, which provide a source of fuel on the island, which is covered mostly by pasture and meadows.

Ireland’s largest city, Dublin, makes a purplish-gray patch peaking out from the clouds about halfway down the east coast. Belfast is more clearly visible on the coast in the northeast, due east of large Lake Neagh. One Ireland’s few other large cities, Cork, is located at the mouth of the Lee River, at the mid-point of the southern shoreline.

Surrounded by water, Ireland has the Atlantic Ocean to its west, the Celtic Sea to the south, and the Irish Sea separating it from England to the east. In the middle of the Irish Sea lies the Isle of Man. Ireland benefits from the moderating influence that large bodies of water have on regional climates. Its winters are cool—but not freezing—and damp, and summertime temperatures rarely exceed 70 degrees Fahrenheit. These moderate temperatures are the result of warmer ocean water being brought up into the North Atlantic by the Gulf Stream, and its extension, the North Atlantic Drift.

The island has a rugged, almost scraped appearance caused by glaciers advancing and retreating over the island during the last ice age. Ireland is part of the same land mass as continental Europe, and the Stone Age settlers who first came to the island between six and 8 thousand years ago probably walked over on dry land—a land bridge similar to the one that allowed settlers to cross the Bering Strait from Siberia into Alaska. The land bridge formed as the moisture from the Earth’s oceans evaporated, fell as snow, and became locked up in massive ice sheets. Sea levels dropped, exposing land bridges.