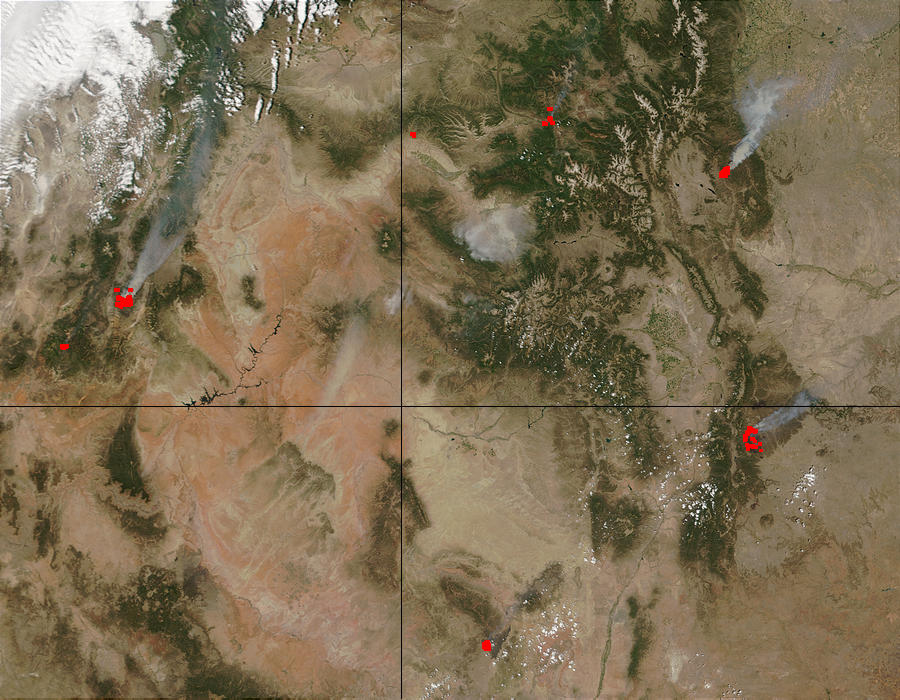 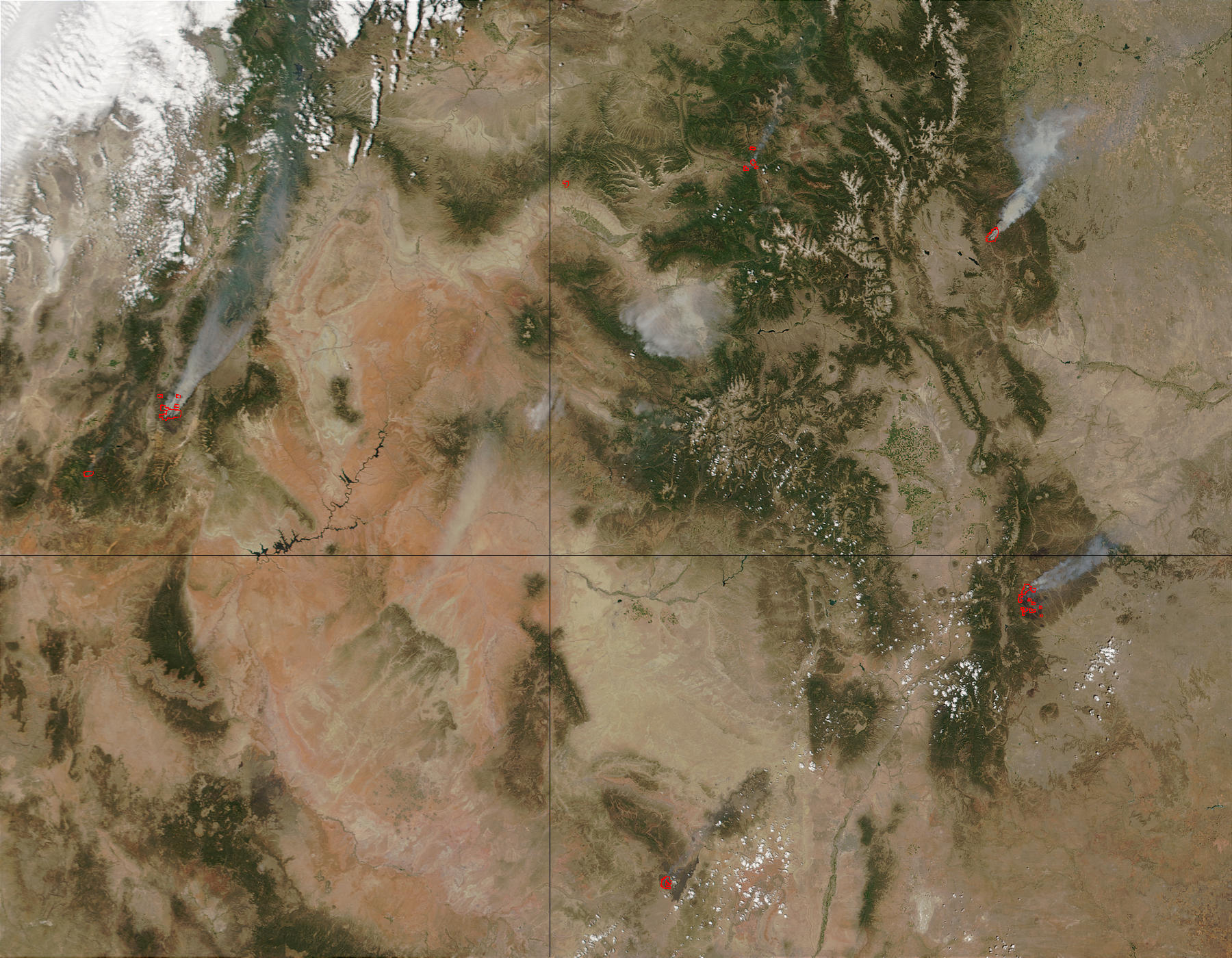 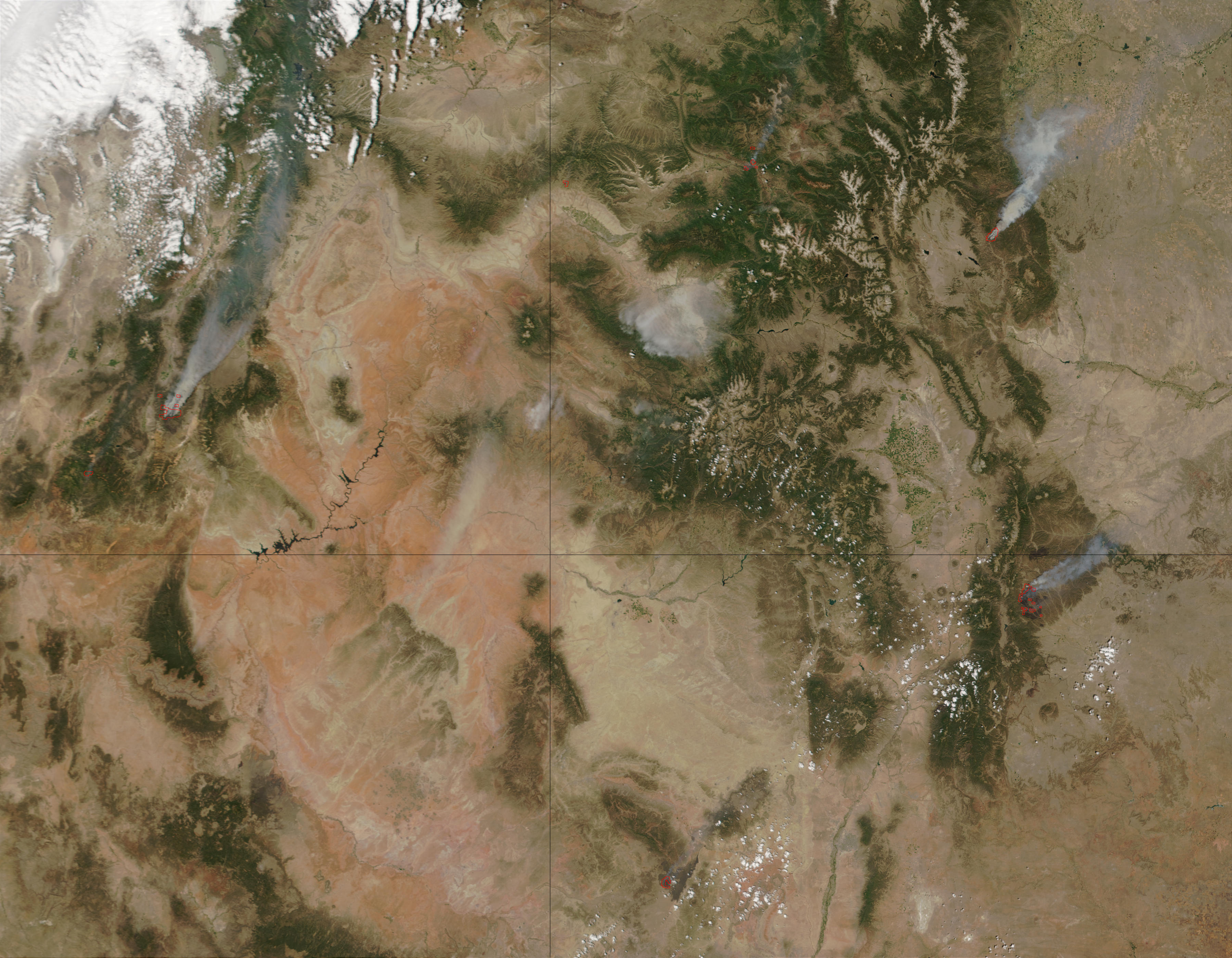 Fire danger in many Western states ranges from high to extreme, and numerous wildfires have resulted from lightning strikes and human carelessness. This Moderate Resolution Imaging Spectroradiometer (MODIS) image from June 9, 2002, shows (clockwise from top left) Utah, Colorado, New Mexico, and Arizona. Large fires detected by MODIS are (clockwise from left) the Big Wash and Sanford Fires in Utah; Long Canyon, Coal Seam, and Hayman, in Colorado; and the Ponil and Cherry Fires in New Mexico. The lower image shows a detail of the Hayman Fire in Colorado. In Colorado, the Hayman Fire is about 40 miles southwest of Denver, and was caused by an illegal campfire in Park County, according to reports from the USDA Forest Service. Smoke and soot are reaching Denver. Roads have been closed and several communities have been evacuated as the fire, which began on Saturday, June 8, grew to almost 20,000 acres by Monday. Also in Colorado, extreme fire behavior has brought the Coal Seam fire to the city of Glenwood Springs, and more than 20 residences have already been lost, with several hundred more threatened. The fire is likely to have started from a coal seam that has been burning underground since the 70s. The western and southern portions of the town have been evacuated. To the south, the Ponil Fire in northern New Mexico has continued to grow since it began as the result of lightning on June 2, and was 85,000 acres by Monday morning. Through the smoke a large burn scar is visible. (A second burn scar straddles the Colorado-New Mexico border. This scar is from a previous fire called the Trinidad Complex.) Numerous historic structures as well as the town of Ute Park are threatened by the blaze. The Cherry Fire is burning in the Malpaís National Monument--the Badlands. Among the structures threatened is an adobe house designed by famous architect Frank Lloyd Wright. On the western (left) edge of the image are two fires burning in Utah, the 5,000 acre Sanford Fire and the 1,800 acre Big Wash fires. These two fires caused road and trail closers in and around Bryce and Zion National Parks. Reports from the National Interagency Fire Center on these and other fires read like a script: "Steep, rugged terrain, high winds, dry fuels, and limited accessibility are hampering containment efforts." This promises to be an active season for firefighters across the western United States.