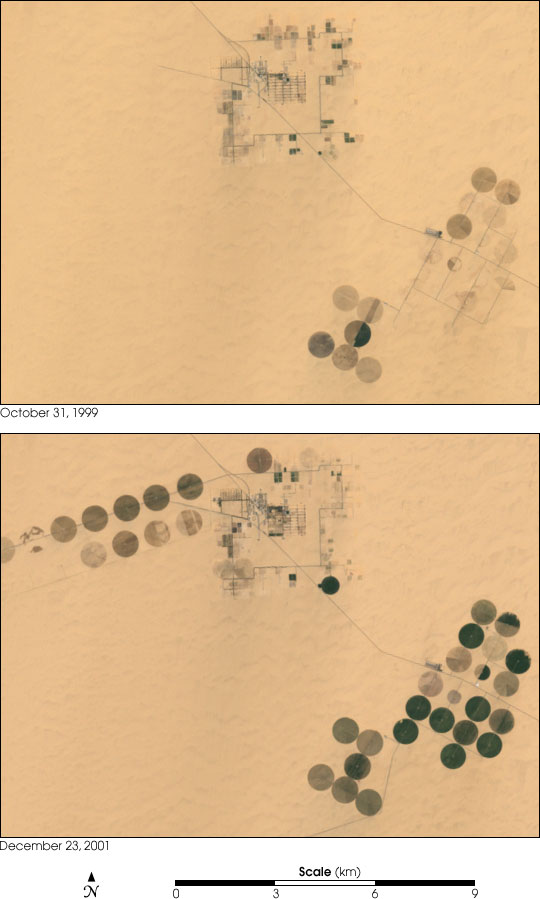 Irrigation in the Heart of the Sahara

Although it is now the largest desert on Earth, during the last ice age the Sahara was a savannah with a climate similar to that of present-day Kenya and Tanzania. The annual rainfall was much greater than it is now, creating many rivers and lakes that are now hidden under shifting sands or exposed as barren salt flats. Over several hundred thousand years the rains also filled a series of vast underground aquifers. Modern African nations are now mining this fossil water to support irrigated farming projects.

The above pair of images shows a small settlement just north of the border between Egypt and Sudan. The dark circles—each about a kilometer across—indicate central-pivot irrigation. A well drilled in the center of each circle supplies water to a rotating series of sprinklers. From October 31, 1999 to December 23, 2001 the number of irrigated fields increased dramatically.

Rainfall in this area of the Sahara is only a few centimeters a year, so the aquifers will take thousands of years (or longer) to recharge, making the water a non-renewable resource. Although no one knows how much water is beneath the Sahara, hydrologists estimate that it will only be economical to pump water for fifty years or so. On the other hand, alternative technologies for providing fresh water in this arid region—primarily desalinization—are too expensive for widespread use. Sudan, Libya, Chad, Tunisia, Morocco and Algeria are some of the other Saharan nations irrigating with fossil water, but the practice is not limited to Africa. In the southern plains of the United States, the Olgallala aquifer is being drained faster than it can be replenished.

These true-color images were acquired by the Enhanced Thematic Mapper plus (ETM+) aboard NASA’s Landsat 7 satellite. The Landsat satellites enable scientists to monitor land use and land cover change dating back to 1972. Landsat 7 is designed to last until at least 2004, and follow-on missions are currently being planned.

Images and animation by Robert Simmon, based on data aqcuired by the Landsat 7 Science Team Landsat data is archived and distributed by the USGS EROS Data Center