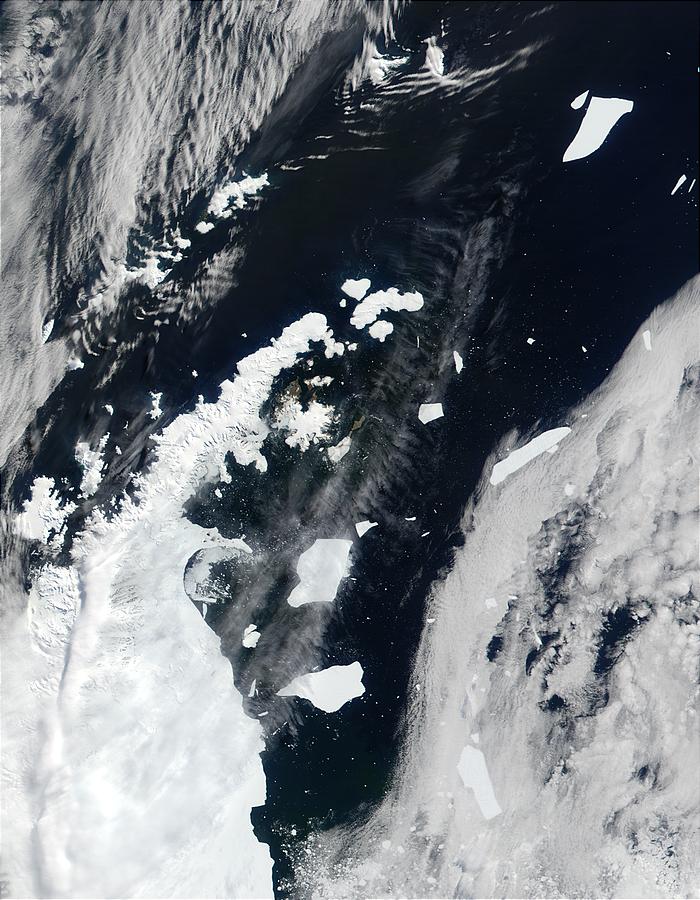 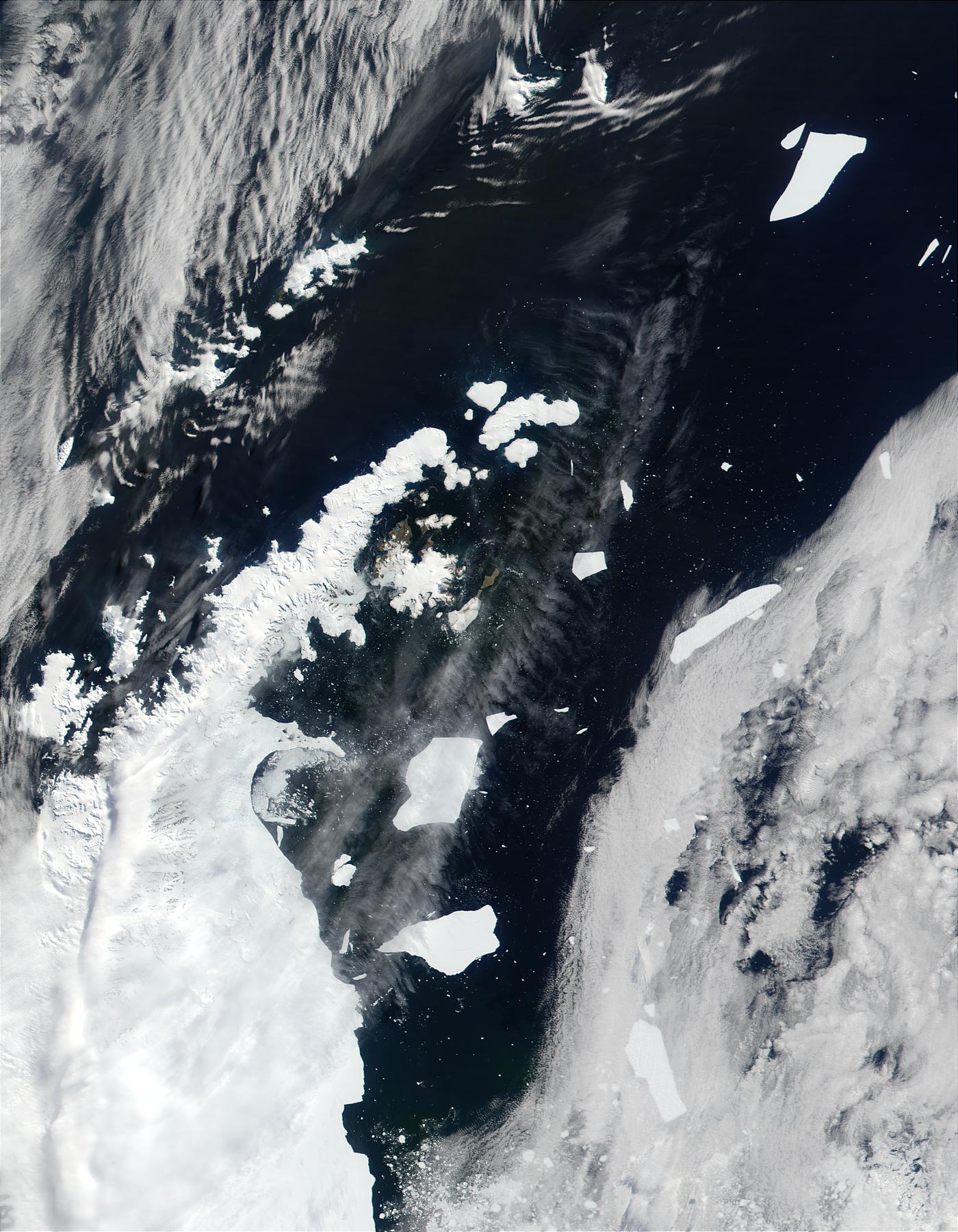 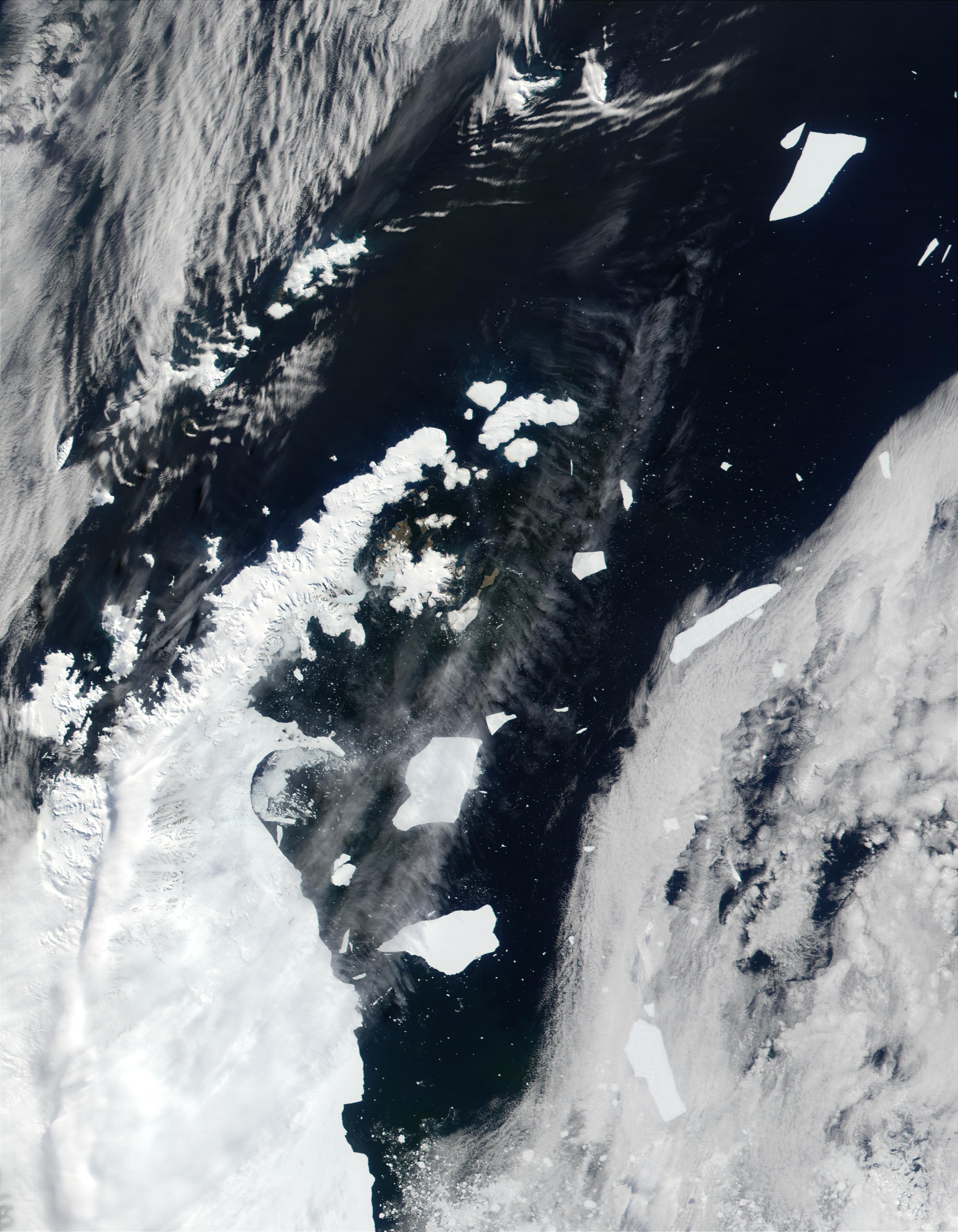 Several large, irregularly shaped icebergs are floating in the Weddell Sea, east of the Antarctic Peninsula, in this true-color MODIS image from February 17, 2002. The location of several of the bergs has changed little over the last three months. Compared to an image acquired on November 13, 2001, the berg at the upper right of the image has spun around, but is still hanging around in the same general location.

Similar slow-movers can be seen just to the east of the Larsen Ice Shelf, which hugs the eastern coast of the Peninsula. The northernmost of those two bergs is designated A38b; the southernmost one is A38a. These bergs were once part of an iceberg greater than 2,700 square miles that broke off the Ronne Ice Shelf (to the south) back in 1998. While the waters of the Weddell Sea in the area ought to be deep enough to float those bergs, it is possible that they have run aground on a topographic high, or ridge, in the sea floor. However, little is known about the underwater topography of that region, and it is also possible that the bergs are simply so massive that they resist being moved by surface wind or ocean currents.

While four years might seem like a long time for an iceberg to hang around, these are certainly no record holders. A berg that broke off the Ross Ice Shelf (on the other side of Antarctica) drifted north and went aground south of Australia. That berg calved in 1987, and hasn't really moved in ten years. While the big bergs have not moved much in the span of time between these images, there is a big difference in the amount of sea ice present in the two images. In general, the rounder chunks of ice are more likely to be seasonal sea ice that forms from the freezing of sea water, while the larger, jagged-edged pieces of ice are more likely to be bergs that broke off an ice shelf at the margin of the continent. It's the height of summer in Antarctica in the February image, and much of the sea ice has melted or drifted away, leaving a relatively large expanse of clear ocean.