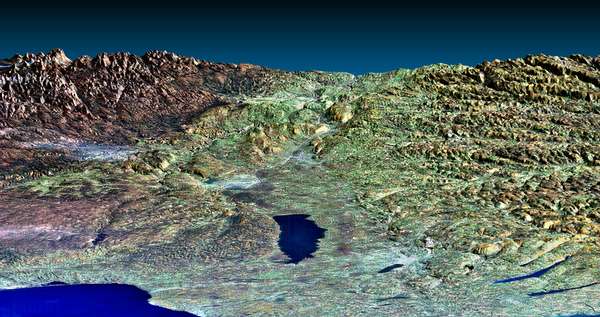 This perspective view of upstate New York shows Lake Ontario in the lower left, the Adirondack Mountains in the upper left, and the Catskill Mountains on the right. This image was generated using topographic data from SRTM and an enhanced true-color Landsat 5 satellite image. Topographic shading in the image was enhanced with false shading derived from the elevation model. Topographic expression is exaggerated 6X.

Fall foliage appears in a variety of colors, as expected for the mid-October Landsat data used here. Redder vegetation generally occurs at higher elevations and toward the north (left), especially in the Adirondack Mountains. The back edge of the data set forms a false skyline. Oneida Lake is just below the scene center. From the lake, Syracuse is toward the lower right, Rome is toward the upper left, and Utica is directly upward from the lake. Oswego is on the shore of Lake Ontario at the bottom edge of the image. All four cities appear whitish. The other whitish areas toward the north (left) are thin clouds in the satellite image. At Herkimer, just beyond Utica, the Mohawk River exits the Adirondacks and flows eastward into rugged terrain and onward toward Albany. Upon close inspection at full resolution, one can see the Erie Canal (dark blue line) running east from Oneida Lake to connect to the Mohawk River. Other parts of the canal connect to the Oswego River running north (left) to Lake Ontario, to Onandaga Lake next to Syracuse, and Cayuga Lake in the lower right corner of the image (just the edge of the lake). Parts of Owasco, Skaneateles, and Otisco Lakes are visable in the lower right (bottom to top). These are some of the Finger Lakes of central New York, with their narrow valleys (Otisco Lake is almost completely hidden by its valley walls). At the full image resolution, a thin white line marks the New York State Thruway from the bottom to the top of the image, passing north (left) of the Onandaga Lake next to Syracuse and through Utica and Herkimer. The valley between the Adirondacks to the left (north) and the Catskills to the right guides both the Erie Canal and New York State Thruway on their way to Albany and the Hudson River (both off the edge of the image), illustrating the importance of topography in transportation.