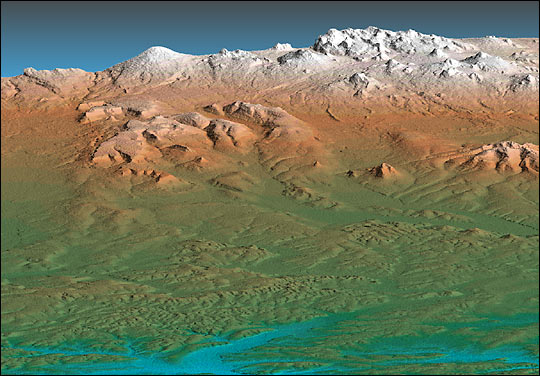 This perspective view shows the western side of the volcanically active Kamchatka Peninsula, Russia. The data are from the first C-band mapping swath of the Shuttle Radar Topography Mission (SRTM). In the foreground is the broad, flat floodplain of the Amanina River, shown in blue. In background of the image is the Sredinnyy Khrebet, the volcanic mountain range that makes up the "spine" of the peninsula. The cluster of hills in the upper right is a field of small dormant volcanoes. High resolution SRTM topographic data will be used by geologists to study how volcanoes form and understand the hazards posed by future eruptions.

This shaded relief perspective view was generated using topographic data from the Shuttle Radar Topography Mission. A computer-generated artificial light source illuminates the elevation data to produce a pattern of light and shadows. Slopes facing the light appear bright, while those facing away are shaded. On flatter surfaces, the pattern of light and shadows can reveal subtle features in the terrain. Colors show the elevation as measured by SRTM. Colors range from blue at the lowest elevations to white at the highest elevations. This image contains about 2300 meters (7500 feet) of total relief. To emphasize subtle differences in topography, the relief is exaggerated by a factor of 5.

The Shuttle Radar Topography Mission (SRTM), launched on February 11, 2000, uses the same radar instrument that comprised the Spaceborne Imaging Radar-C/X-Band Synthetic Aperture Radar (SIR-C/X-SAR) that flew twice on the Space Shuttle Endeavour in 1994. The mission is designed to collect three-dimensional measurements of the Earth's surface. To collect the 3-D data, engineers added a 60-meter-long (200-foot) mast, an additional C-band imaging antenna and improved tracking and navigation devices. The mission is a cooperative project between the National Aeronautics and Space Administration (NASA), the National Imagery and Mapping Agency (NIMA) and the German (DLR) and Italian (ASI) space agencies. It is managed by NASA's Jet Propulsion Laboratory, Pasadena, CA, for NASA's Earth Science Enterprise, Washington, DC.