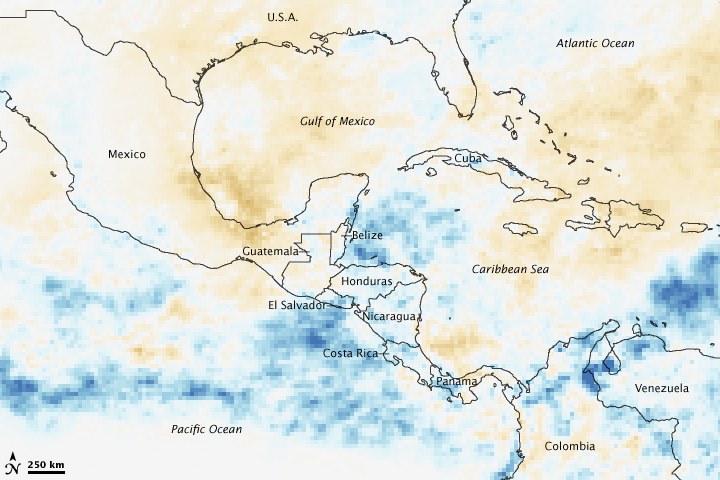 Landslides and floods caused extensive damage throughout Central America in the latter half of October 2008. Tropical Depression 16 moved ashore over Honduras on October 16 and slowly cut its way over Central America, dumping heavy rain from southeastern Mexico to Costa Rica. This image, made with data from the Tropical Rainfall Measuring Mission (TRMM) satellite, shows how much more rain than average fell over the region during the month of October.

Regions that received more rain than average compared to previous Octobers are blue. Those places that received less rain are brown, while average rainfall is represented in white. A swath of blue covers Central America from southern Mexico to western Panama, the same region affected by Tropical Depression 16.

Though not as powerful as a hurricane, the tropical depression proved to be as destructive. The rain swelled rivers and caused landslides, damaging homes, transportation infrastructure, and crops throughout Central America, said the Food and Agriculture Organization (FAO) of the United Nations. Approximately 50 people died and 410,000 were affected by the disaster. Seventy percent of those affected were in Honduras, said FAO.