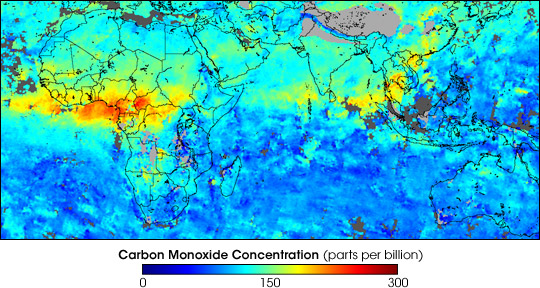 Carbon Monoxide in Africa and Asia

The weather in the tropics is dominated by the tropical rain belt, which oscillates from the northern to the southern tropics over the course of the year. The tropical rain belt lies in the southern hemisphere roughly from October to March, and during this time the northern tropics experience a dry season in which precipitation is rare and biomass burning is frequent in regions like Central Africa (left) and Southeast Asia (right). Many of the fires are of human-made origin and serve the purpose of land-clearing and pasture and farmland renewal.

Burning of biomass releases large amounts of carbon monoxide (CO) into the atmosphere that are detected by the Measurements of Pollution in the Troposphere (MOPITT) remote sensing instrument on board the EOS satellite Terra. The image above shows the measured concentrations of CO at 700 millibars (roughly 2-3 km altitude) averaged over December 2-12, 2004. High concentrations of CO (color-coded in red) are seen over the biomass burning region, but the CO also spreads out over nearby oceans. Regions where no data are collected either due to clouds or high surface elevation (such as over the Himalaya) are colored in gray.