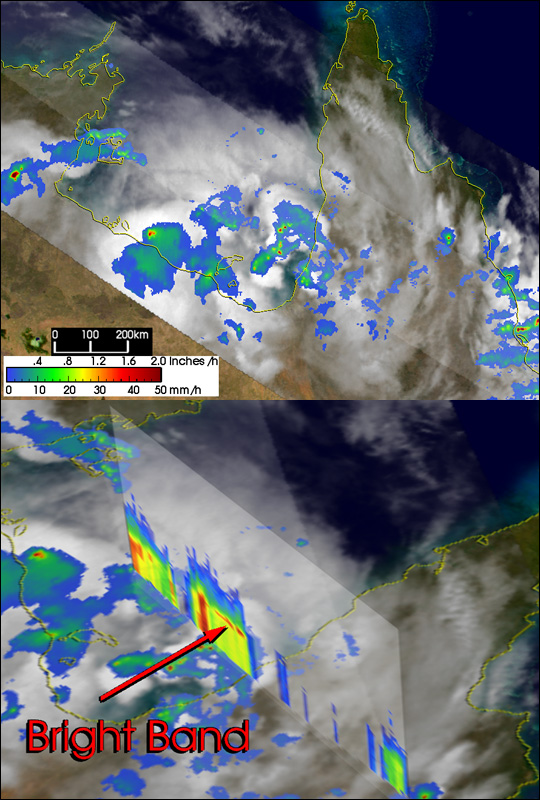 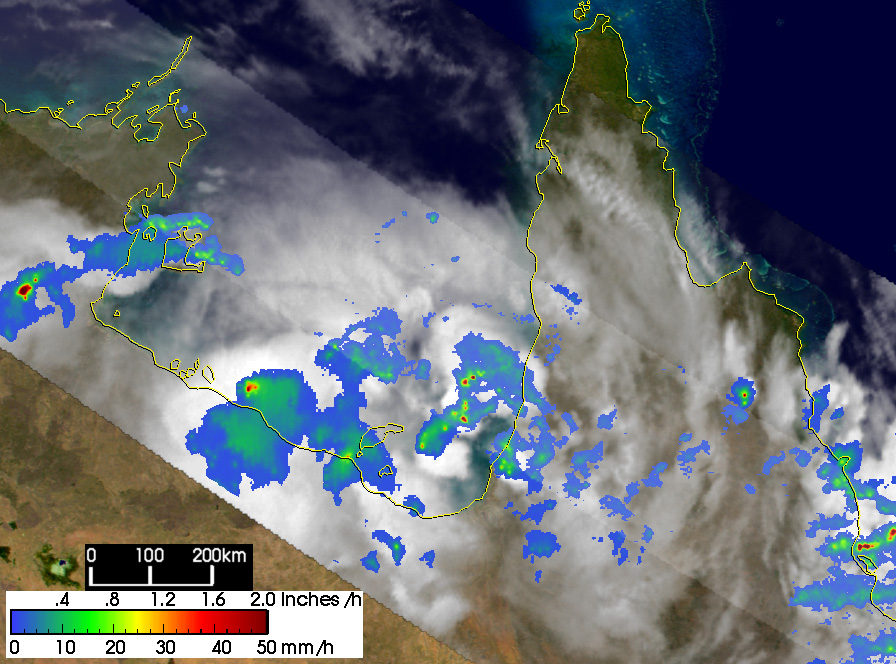 Tropical Cyclone Fritz first formed into a tropical cyclone on 10 February 2004 in the Coral Sea east of Queensland, Australia. The storm then came ashore on the morning of the 11th (LST) as a minimal cyclone along the northeast coastline of Queensland just north of Cape Melville. Most of the rainfall with Fritz was away from the center near Weipa to the north and Cairns to the south. The system weakened into a tropical depression over land and continued moving westward cutting across the Cape York Peninsula before re-emerging over the waters of the Gulf of Carpentaria. It then re-intensified back into a Category 1 cyclone on the 12th. Fritz's circulation, however, was too disrupted over land to have time to get too well organized and thus allow for significant strengthening. However, it did manage to reach Category 2 status with peak wind gusts exceeding 125 kph (75 mph) before crossing Mornington Island in the southern Gulf of Carpentaria. Fritz then made landfall again on the far northwest coast of Queensland.

The Tropical Rainfall Measuring Mission (TRMM) satellite captured these unique images of Cyclone Fritz while it was in the southern Gulf of Carpentaria. The images were taken at 14:18 UTC on 11 February 2004 (12:18 am Australian EST 12 February 2004). At the time, Fritz was categorized as a Category 1 cyclone by the Brisbane Tropical Cyclone Warning Centre with peak wind gusts of less then 125 kph (75 mph). The first image shows the horizontal distribution of rain rates as seen by the TRMM satellite. Rain rates in the center swath are from the TRMM Precipitation Radar (PR), the first precipitation radar in space, while rain rates in the outer swath are from the TRMM Microwave Imager (TMI). The rain rates are overlaid on infrared (IR) data from the TRMM Visible Infrared Scanner (VIRS). Fritz is shown to have a poorly organized circulation with no discernable eyewall. At this time only small, isolated areas of heavy rainfall are present (dark red spots). Tropical cyclones need the heat that is released when water vapor condenses into the cloud droplets that form the precipitation to drive the storm. This process is most efficient when the storm is well-organized and the heating takes place near the center. The second image shows a vertical cross section looking towards the west through the northern part of storm from the TRMM PR. It shows areas of heavy rainfall (darker reds) associated with rainbands away from the center of circulation.