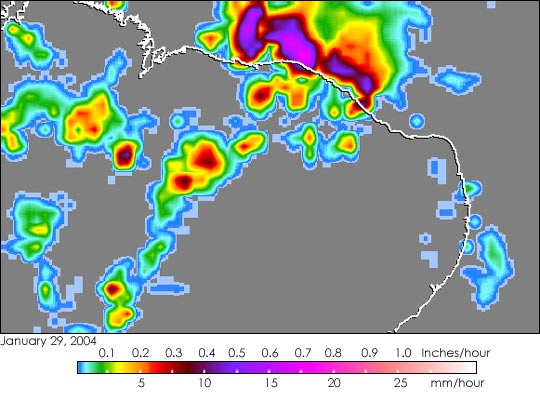 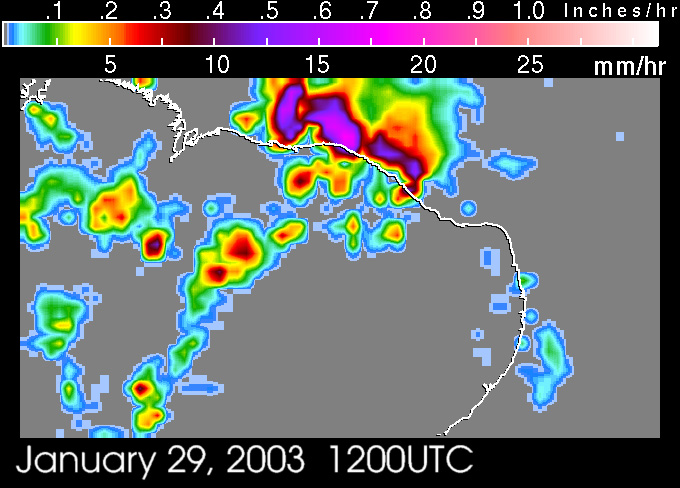 Heavy rains have caused major flooding over parts of Brazil during the past month where at least 66 people are reported to have perished as a result of the flooding and mudslides brought on by the rain. The northeastern coastal city of Fortaleza was reported to have received over 10 inches of rain on the 29th of January alone, the highest daily total there since 1910. The rains were triggered by cold fronts pushing up from the south and leaving behind boundaries that provide the focus for warm, humid air flowing in from the tropical Atlantic to generate showers and thunderstorms.

The TRMM-based, near-real time Multi-satellite Precipitation Analysis (MPA) at the NASA Goddard Space Flight Center monitors rainfall over the global tropics. This image shows instantaneous rain rates on January 29 at 1200 UTC. It shows a sizeable convective system along the northeast coastline of Brazil containing rain rates of up to 3/4 inch per hour (pinkish-purple areas). Inland, weakly organized lines of scattered showers contain rain rates on the order of 1/3 inch per hour (darker reds).

A second TRMM image, provided above, shows MPA rainfall totals for northeastern Brazil for January 27 – February 3, 2004. Widespread areas of rainfall totals on the order of 3 to 5 inches (green areas) extend over much of the region with localized amounts approaching 9 inches (red areas).