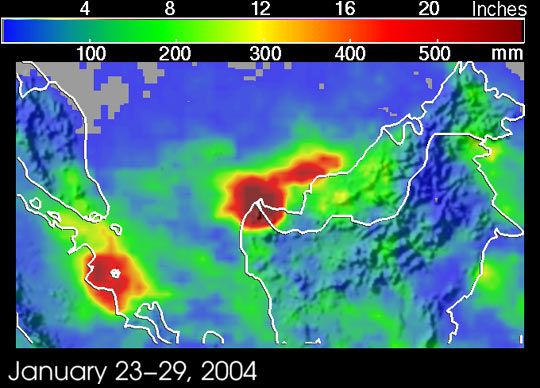 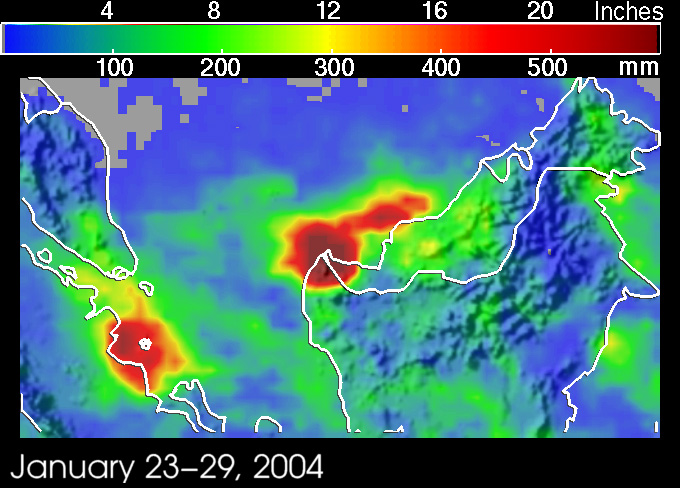 For Malaysia, January climatologically falls in the middle of the northeast Monsoon, which lasts from roughly mid-November to March and brings steady northeast winds to the region. Typically during the northeast monsoon, occasional heavy rain events that last on the order of a few days are common. The TRMM-based, near-real time Multi-satellite Precipitation Analysis (MPA) at the NASA Goddard Space Flight Center monitors rainfall over the global tropics and captured such an event. MPA rainfall totals for the period 23-29 January 2004 show that upwards of two feet of rain may have fallen along the northwest coast of Borneo and the far western portion of Sarawak, Malaysia near Kuching (right-most dark red area). News reports say that floodwaters up to two meters deep covered several villages around Kuching as the Sarawak River burst its banks. By January 26, 5,535 people had been evacuated from the region.

Another area of near 20-inch amounts occurred over coastal Sumatra south of Singapore (left-most dark red area). Widespread rainfall totals of up to 8 inches (green areas) are common throughout the region for this same period.