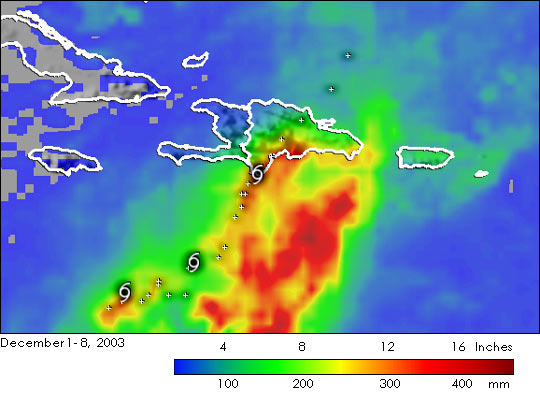 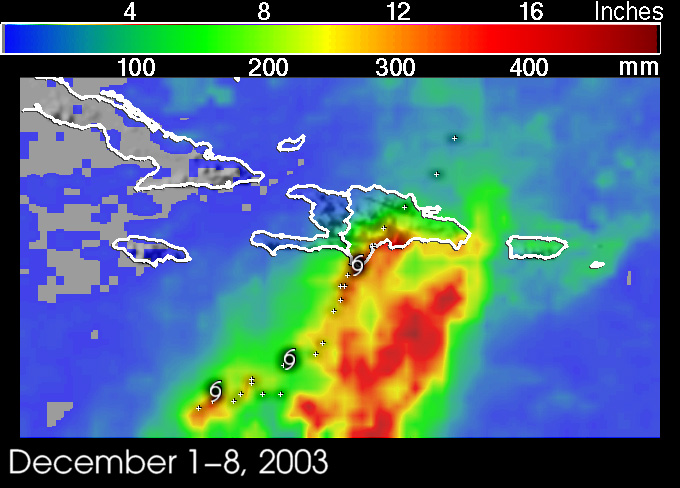 With the hurricane season officially over the last day of November, Odette became one of the rare, Atlantic tropical storms and the first Caribbean tropical storm to form in the month of December. After forming in the central Caribbean on December 4, 2003, Odette moved northeastward ahead of an approaching trough and struck the southern coast of the Dominican Republic on the evening of the 6th with maximum sustained winds estimated at just over 50 miles per hour. Subsequent flooding caused two deaths.

The Tropical Rainfall Measuring Mission (TRMM)-based, near-real time Multi-satellite Precipitation Analysis (MPA) at the NASA Goddard Space Flight Center shows rainfall totals along Odette’s path for the period 1-8 December. Most of the heaviest amounts (darker reds), on the order of 12 inches or more, appear offshore and to the right of the storm track. However, the southern coast of the Dominican Republic is also shown to have received upwards of a foot of rain from Odette near and just to the right of where the storm made landfall. White crosses mark the storm track with tropical storm symbols indicating the 00Z positions.