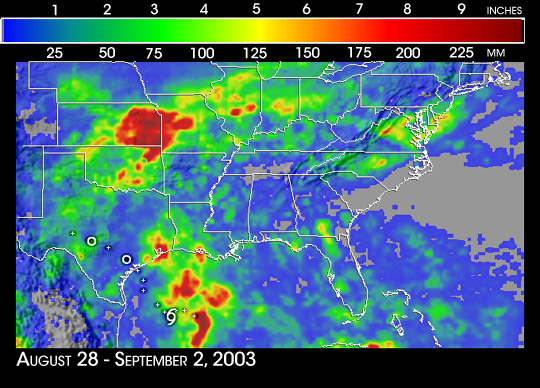 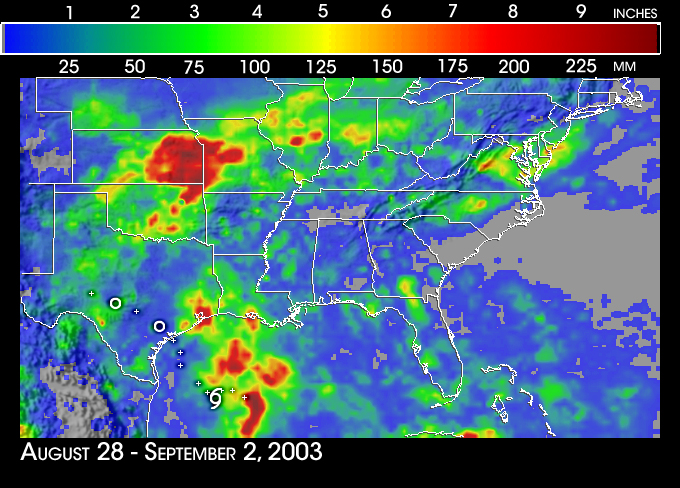 Heavy rains fell over the central US from Kansas to the western Gulf coast over the Labor Day weekend resulting in deadly flooding. A stationary front lying across the central plains provided the focus for abundant rainfall and thunderstorms as Gulf moisture flowed in from the south. During this same period, Tropical Storm Grace came ashore as a minimal tropical storm on the central Texas gulf coast bringing heavy rains to the Houston area. The TRMM-based, near-real time Multi-satellite Precipitation Analysis (MPA) at the NASA Goddard Space Flight Center was able to capture these events. It shows that the heaviest rainfall totals (darker reds) occurred over eastern Kansas, western Missouri and the northeast corner of Oklahoma with a broad area of 6 to 8 inch amounts. Locally, values exceed 9 inches. Flash floods were reported near Emporia, Kansas where several people were swept away in their vehicles along Interstate 35. Grace dumped upwards of 6 inches of rain in and around the Houston area with locally heavier amounts. The crosses and and storm/depresson symbols mark Grace's path.

TRMM is a joint mission between NASA and the Japanese space agency, NASDA.