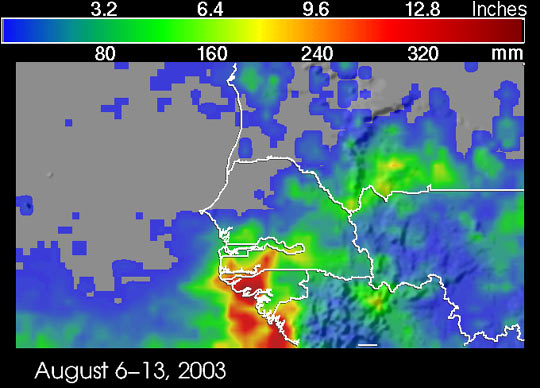 Torrential rains fell over parts of West Africa during the past week as a result of the summer monsoon, causing severe flooding that resulted in damage to crops and livestock as well as several flood-related deaths. This image from the Tropical Rainfall Measureing Mission(TRMM)-based, near-real time Multi-satellite Precipitation Analysis at NASA Goddard Space Flight Center shows rainfall totals for the period 6-13 August, 2003. The heaviest amounts fell over the coastal areas of Senegal (center), Guinea Bissau (due south) and Guinea (southewast), with rainfall acumulations of over 12 inches (darker red areas). In addition, widespread areas of interior Senegal, southern Mauritania (top right), and north-central Guinea received up to 6 to 8 inches of rain (green and yellow areas). Parts of Mauritania received what is normally a full year’s worth of rain in 24 hours.