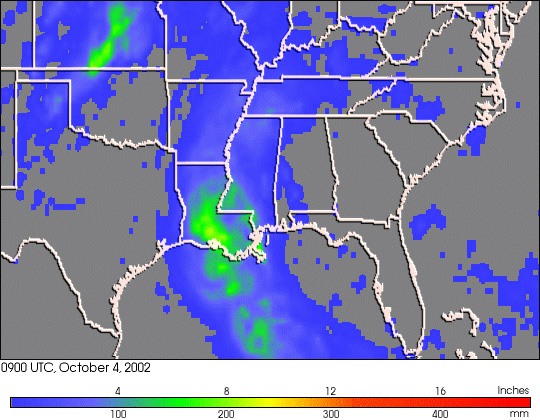 This image, and animation, shows the swath of rain accumulation produced by Hurricane Lili after making landfall over coastal Louisiana, and proceeding north up the Mississippi River Valley. A rainfall mapping estimate based on NASA and NASA’s Tropical Rainfall Measurement Mission (TRMM) satellite was used to create these images.

Lili’s rain “footprint” followed a similar trajectory to that left behind by Hurricane Isidore, which also made landfall over Louisiana last week. Isidore’s vortical circulation prior to and during landfall was enormous, occupying much of the Gulf of Mexico. Unlike Isidore’s broad rain swath, however, Lili was a very compact storm, and the heavy rain track affected a much narrower region. Another reason for this difference is the fact that Isidore’s remains interacted with a frontal system stalled across the southeastern United States, which helped to squeeze out additional moisture in advance of Isidore. By early this morning, rain totals from Lili approached 10 inches across south central Louisiana.