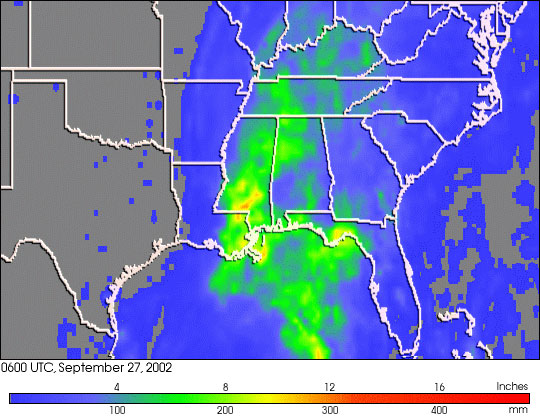 The image (and movie) above shows precipitation estimates during Tropical Storm Isidore’s landfall along the U.S. Gulf Coast, acquired by the NASA/NASDA Tropical Rainfall Measuring Mission. The accumulation is shown from the early morning on September 23 through midnight on September 27, 2002. Isidore had weakened considerably from its earlier landfall over the Yucatan Peninsula, but it still contained a very broad circulation and enough moisture and energy to induce widespread flash flooding across several Gulf Coast states. Rain totals appear to exceed 8 inches in many locations.

One interesting aspect of Isidore was its interaction with a pre-existing frontal system in the southeastern United States. The two systems together enhanced the rainfall produced during Isidore’s extra-tropical transition. In fact, the combination of Isidore’s copious moisture and the frontal system caused widespread rain to spread northward into the mid-Atlantic states region, far in advance of Isidore’s movement out of the Gulf of Mexico. As of today, Isidore has acquired extra-tropical characteristics (containing both a warm front and a cold front) and its spinning core is tracking northward along the Appalachian Mountains, bringing the threat of severe weather to the mid-Atlantic region.